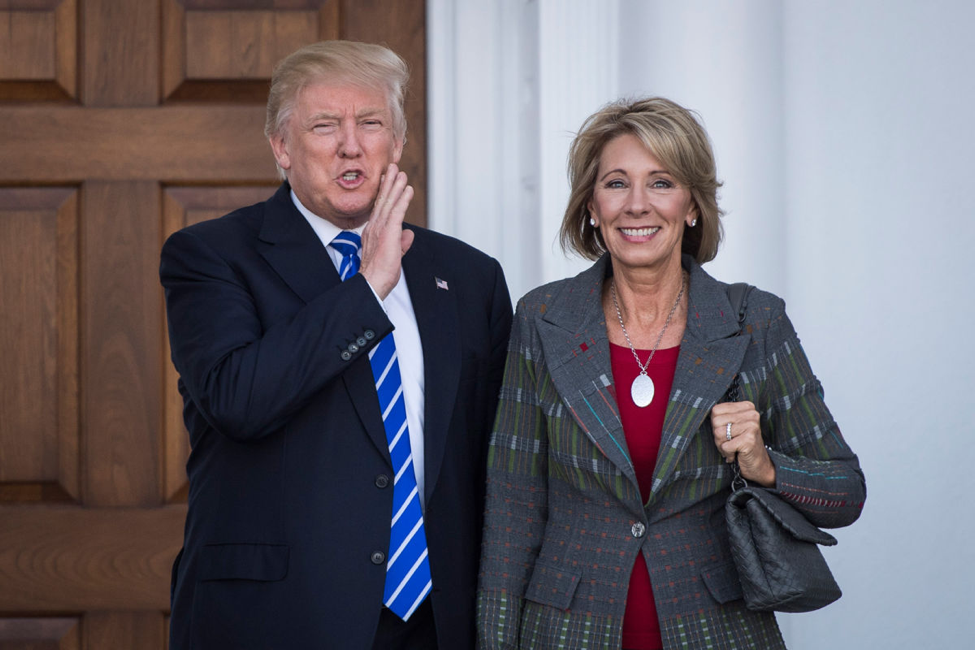 New secretary of education Betsy DeVos and her agenda for the future of American education reminds us of the problematic meaning of the word “choice.” Like many of the concepts that are being critiqued as products of our post-truth age, the double meaning of “choice” has quite a long lineage. We might locate the problematics of “choice,” ironically enough, with the English, American, and French revolutions, which were supposed to replace the tyranny of monarchy. What these revolutions—the hallmarks of liberal democratic states of the future—actually initiated was that there is no choice about choice. Let’s explain: Before the rise of parliamentary and elected democracies, there was literally no choice: all political power was established through inherited monarchial blood lines and enforced through military force. Afterwards, with the advent of democratic means of choosing power, citizens were compelled, more or less, to choose among choices, between this and that candidate, political party, government, and so on. The point was citizens had to choose, like they do today in democratic elections, referendums, etc.: you have to choose: either Yes or No to Brexit, to Repeal or Not Obamacare (as is happening at this moment),[1] and so forth. But here is the paradox: socialism and communism, theoretically ideologies that are the extreme of anti-monarchial rule, when manifested in modern times, most clearly in the former Soviet Union and Communist China, do not actually allow you to choose any alternative to the state: you have to be a communist. As Lenin clearly showed in 1917, the reality of realpolitik is that people have to be forced to be free: there is no choice: you must be free! We are reminded of Mao’s famous saying “political power grows out of the barrel of a gun,” whatever it is.

This kind of paradoxical forced choice has been at work increasingly so in the past century and is becoming commonplace in the current age. In America, the “choice” in terms of abortion is “pro-life” or “pro-choice:” the former is the Golden Rule of conservative evangelicals, etc.; the latter the absolute tenet of the liberal left. Like global warming, there is no choice: if you are Republican you are on one side; Democrats only one choice, period.

But this bi-polar situation of “choice” gets turned around in the new Betsy DeVos brand of education policy: “choice” is what at stake and if you are conservative you must choose “choice” (school choice; vouchers, free market-driven education, etc.). Freedom here is synonymous with “choice,” with no alternative. Simultaneously, liberals, who have literally no choice but to support public education, must needs choose “no choice” but public education.

Let us not forget that DeVos is part of the DeVos’ family Amway empire, a company that was a pioneer in mass-marketing quantification along with an abundant ideological message. Amway is not simply a company but a kind of religious ideology, implicitly and explicitly, and what DeVos wishes to foreword is but one of a multi-faceted ideological cultural revolution. Amway is rooted in the Calvinist principles of predestinated spiritual destiny through mass-marketing and sale of moral and spiritual rejuvenation that would have made Max Weber proud. As such, what DeVos’ is trumpeting is but the latest iteration of the culture wars that have been part of civilization since the Renaissance. The reform of education is but the largest and most abundant piece of the ideological pie that conservatism wishes to reform. This is nothing less than a Reformation of American culture which includes mass media entertainment, art and the humanities, and business—with education being the nodal point of all cultural change towards traditional Christian values. Let us not forget revolutions are really not about progress but, literally, a revolving back to something; that is what the word means. In the case of DeVos, it’s a return to pre-secular educational values, and seemingly, “choice.” But revolutions, reformations, and renaissances are always already re-turns, really. What DeVos’ is heralding in the name of education is nothing less than a return to traditional American evangelical pedagogy, which will be abundantly marketed and sold according to “choice.” In this schizophrenic universe liberals are screaming that this will be bloody murder to public education. But liberals have perhaps made this inevitable by continuing to support the status quo with no real alternative choice. As Erasmus, who knew all about irony, explained to Luther: the choice is not about choice but free-will vs. predestination.

[1] The name of the congressional group leading the movement against the Bill that would replace so-called Obamacare, is called “The Freedom Caucus.” Their position, in general, is that no one should be compelled “to choose” being covered.