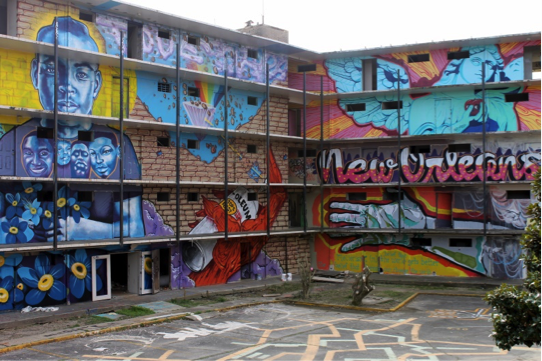 In a city where street culture is a way of life, where on any given day one may peruse handmade goods at a pop-up sidewalk art market, listen to a brass band playing on a street corner, or join in a spontaneous party of revelers, many in New Orleans take a less celebratory stance toward street art and graffiti. This holds especially true of law enforcement, city officials, and neighborhood and business associations that claim graffiti art not only mars the city’s historic surfaces but also contributes to its pervasive violent crime problem. In 2011 after a mass shooting in French Quarter, the Times-Picayune reported an NOPD crackdown on graffiti writers, despite the police superintendent’s attempts to reduce minor arrests. Additionally, tourists interviewed by local media reveal distaste when seeing graffiti in the city, and Quarter street performers have condemned it for disrupting tourists’ perceptions of New Orleans as ‘timeless’ and ‘different’ from other U.S. cities. It’s ironic that nicknames for New Orleans, such as the Big Easy and the City that Care Forgot, belie its recent uptick in enforcement of codes that determine not only acceptable noise levels but also sanction specific kinds of street art and performance. 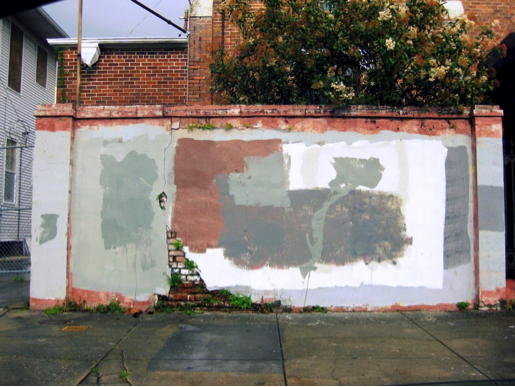 Before Hurricane Katrina, official responses to graffiti and street art were typical of other urban environments. Graffiti scholar Jeff Ferrell describes it as a “war of the walls,” a cat and mouse game between painter and painted over. In the years since the storm, harsher laws against graffiti writers have passed at the state level, one specifically directed at the defacement of historic buildings. Additionally, Operation Clean Sweep founder Fred Radtke, along with the endorsement of city officials, has attempted to enforce a “zero tolerance policy.” Radtke’s imprint—buffed grey, pink, and blue walls that have earned him the nickname “Gray Ghost”—is found all over the city. Yet, in his hyper-enthusiasm for cleaning up New Orleans, Radtke himself broke laws, illegally buffing Katrina-related street art and commissioned murals, which instigated an outcry among proponents of graffiti. However, eliminating graffiti and street art by enforcing stricter penalties and sanctioning local vigilantes has been largely unsuccessful. 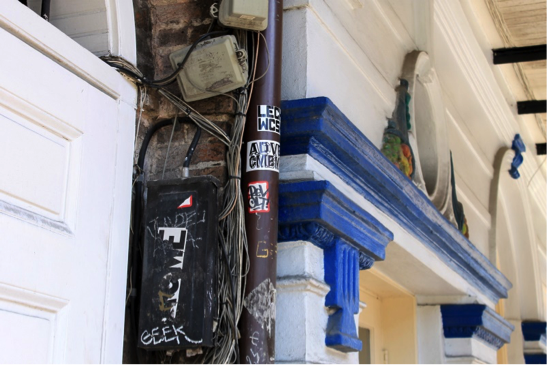 STICKERS AND TAGS ON DECATUR STREET IN THE FRENCH QUARTER.

In downtown neighborhoods, illegal graffiti and street art prevail in the nooks and crannies of buildings, back alley ways, and parking lots. Any surface is a potential canvas, especially those often overlooked objects we navigate daily: doors, trash cans, street signs, billboards, fences, and sidewalks. In industrial areas and neighborhoods with excessive blight, more elaborate pieces are found on and inside abandoned warehouses, public housing, and corporate high-rises. Getting up and inside these buildings requires not only physical strength and stamina but also mental focus. Getting caught can result in steep fines and even a jail sentence. Police have begun to track down graffiti writers using video for identification purposes, such as one posted on Nola.com after the St. Roch Market had been vandalized in May 2015. To mitigate the physical and legal dangers, graffiti writers typically work in formal or informal groups known as crews. Additionally, some business owners have started to allow writers and artists to work on their buildings. Known as free or legal walls, these spaces allow artists to work without fear of retribution.

Paralleling the emergence of the Black Lives Matter movement, Exhibit Be revealed street art and graffiti’s capacity for engaging communities of color as well as the arts community.Piano

As more young people have moved to New Orleans since the storm, stencils, wheat paste posters, tags and stickers have increased citywide. British stencil artist Banksy’s high-profile visit to New Orleans in 2008 initiated a stream of national and international street artists into the city, many have worked with New Orleans’ artists, such as Parisian artist Kashink who contributed to a wall-length mural on a local business in the 7th Ward, and Swoon who worked with community artists on the now defunct music box or Dithyrambalina. For many visiting street artists and graffiti writers, New Orleans has become a ‘spraycation’ destination. Using Flickr and Instagram, graffiti and street artists (and their devout followers) are able to find each other, share their work, and get commissions with other artists in legitimate spaces.

Because of its growing popularity in urban centers, some fear street art will contribute to rising property costs while those in low income areas express dismay that tags and throws will lower their property value. This latter view of graffiti—that its illegal aspects connote a relationship to crime, what is called “broken windows” theory—has been slightly ameliorated by collaborations among street artists, developers, businesses, and galleries. Some local businesses in New Orleans showcase well-known artists’ work on their exterior and interior walls. New Orleans’ street artist Brandan Odums, commonly known as BMike, has painted numerous Afro-centric murals around the city. Moreover, developers such as Sean Cummings see graffiti as enhancing neighborhoods. His collaboration with artist Skylar Fein to create a permission wall of shipping containers around the perimeter of the Rice Mills in Bywater was, according to an interview with art critic Doug MacCash, a perfect fit for the Bywater neighborhood. Another developer, Lex Kelso, provided a warehouse he bought for a one-night exhibit titled “Bombthreat,” organized by Fein and representing graffiti artists citywide. 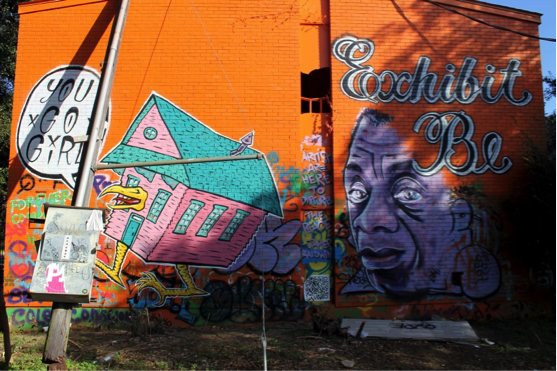 ENTRY TO EXHIBIT BE, THE FORMER WOODLANDS, ON THE WEST BANK.

In September 2014, developer Bill Thomason discovered BMike and others painting illegally on his West Bank property. Rather than call the police, Thomason allowed the abandoned low-income high rise, known as the Woodlands to be used for Exhibit Be, a Prospect.3 event that showcased numerous local and international artists. As a testament to Odums’ reputation (and street art as an emerging art form), over 2,500 people attended the exhibit on its first day. More than an outdoor art exhibit, Exhibit Be also memorialized significant African American leaders and the many displaced people who lived there after Hurricane Katrina.  Due to activist Malik Rahim and hundreds of volunteers’ efforts, the non-profit Common Ground provided services to thousands of displaced citizens who had nowhere else to go. In one unit, Wildseeds, a women-of-color feminist collective, constructed an educational space utilizing art and personal effects left behind by the former tenants to craft a history and living memorial to the displaced populations of the city.

Paralleling the emergence of the Black Lives Matter movement, Exhibit Be revealed street art and graffiti’s capacity for engaging communities of color as well as the arts community. A blighted space, what had once created shelter for many, became repopulated during Exhibit Be not just with people but with art, music, performance, and poetry. Even school tours were conducted during its three-month installation. The exhibit enacted a different relationship between authorities and street artists, one of co-operation, not antagonism. On its closing day, the MLK holiday, even Mayor Landrieu visited the exhibit bestowing the artists involved with official certifications of appreciation for their community service. Events such as Exhibit Be reveal how artists, activists, developers, and institutions working together can contribute to a more inclusive view of the street: one that explores the intersection of “legitimate business” sanctioning outsider art, and outsider artists sanctioning a city’s demographic change.

Doreen Piano has several new research projects underway. She has created a print and digital archive known as the Writing After Katrina Archive Project (WAKAP) that is a repository of Katrina-related student writings produced in the English Department at UNO. Additionally, she is currently documenting the recovery of the city’s public culture through the aesthetic, collective, and political uses of public space by New Orleans’ residents. Her research about New Orleans dovetails with a growing interest in visual material culture and cultural geography and its intersection with critical literacy practices.