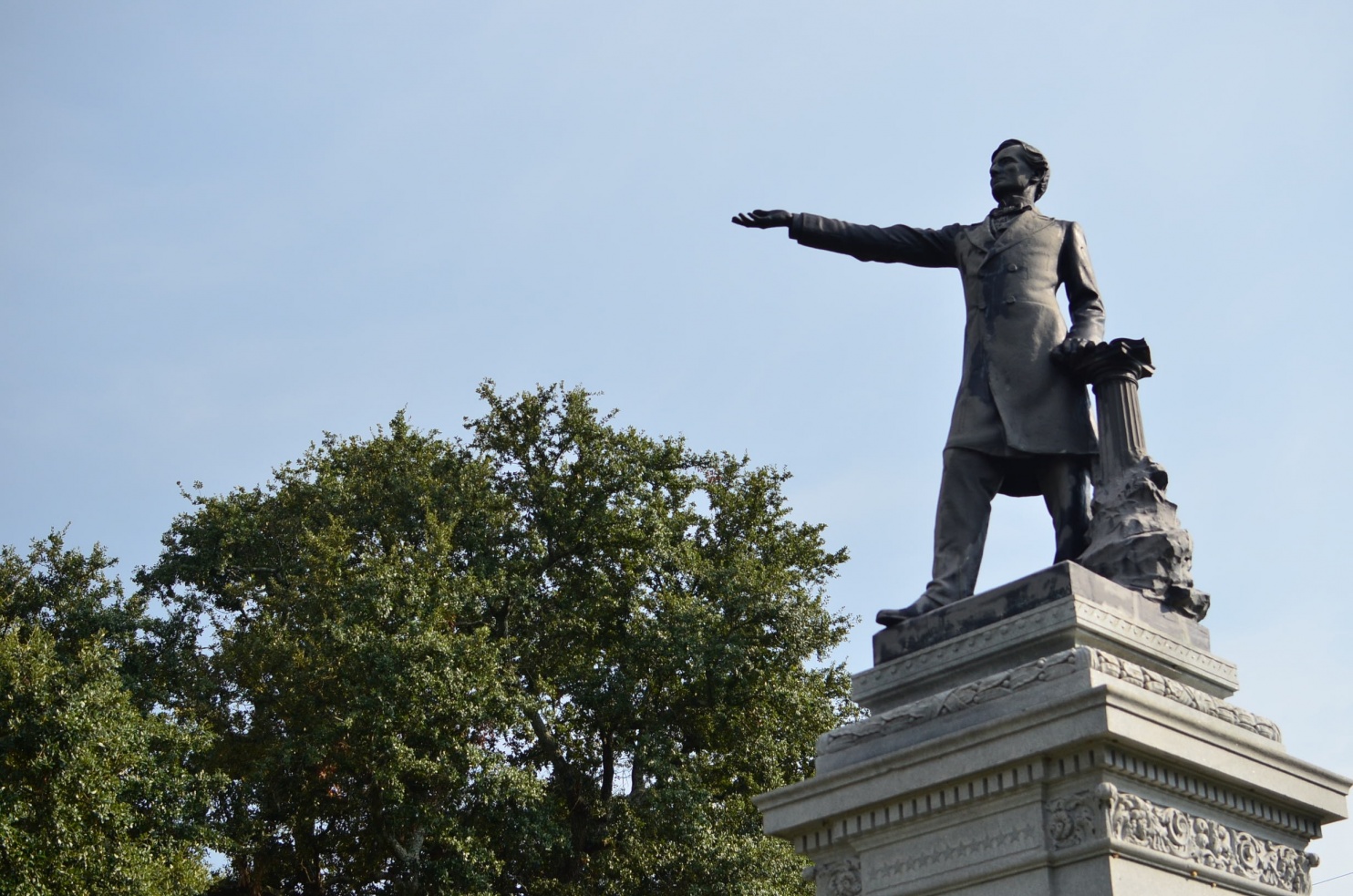 On September 2, the Vieux Carre Commission, an organization tasked with preserving the historic integrity of the French Quarter, voted for the second time to declare the Battle of Liberty Place monument a public nuisance. The New Orleans City Council first declared the thirty-five foot, white marble obelisk a public nuisance in 1993. The monument, currently located on Iberville Street near the Mississippi River, was erected in 1891 at the foot of Canal Street to memorialize a battle between a Dixiecrat militia and Reconstruction-era Republicans. The monument reflects New Orleans’s shifting and often complicated, contentious attitudes about race and region. An inscription added in 1936 legitimizes the white-elected Democratic government fifty years prior as it mocks the federally-backed Republican government with the insult “carpetbagger,” a curse Southerners reserve for outsiders, particularly outsiders from the North and Midwest who come here with intentions to reform and exploit our region. In the 1970s after the Civil Rights Movement, another inscription was added to distance contemporary New Orleanians from white supremacist ideology and to re-dedicate the monument to all who died in the 1874 skirmish. Removed entirely from its Canal Street space, it was later restored and then finally moved to its less prominent location on Iberville Street. 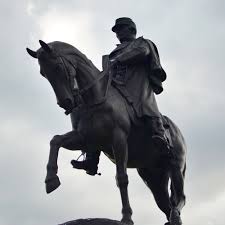 THE G.T. BEAUREGARD MONUMENT STANDS AT THE ENTRANCE TO CITY PARK.

With passionate supporters both in favor and against its removal, its fate and future location remain uncertain as city leaders schedule meetings to discuss three other citywide monuments. The bronze likeness of Robert E. Lee at the center of Lee Circle is also targeted for removal, along with the statue depicting Confederate general G.T. Beauregard on his horse that guards the entrance to City Park, and the 6’4” bronze Jefferson Davis atop a granite base on Jefferson Davis Parkway. Each monument is at least one hundred years old, so why now in New Orleans, a city whose allure rests heavily on the commodification of its sometimes ignoble past, do some residents and city leaders insist these monuments’ time is up?

Several explanations have been offered, including Mayor Mitch Landrieu’s upcoming celebrations of our fair city’s Tricentennial. While birthdays encourage reflection, New Orleans is not a city known for embracing change. The proposals to remove the four monuments are not the result of citywide introspection but are external in origin, and on a national stage, likely to become a tangential footnote in the much larger context of gun violence and racial discrimination in America.

At the national level, the Black Lives Matter movement necessitated by violence against African-Americans provides ample evidence that institutionalized racism continues to destroy lives and proves white supremacy is not confined to the borders of the old Confederacy.

The most recent installment begins in Charleston, really, though there have been more than seventy mass shootings in the last thirty years and nearly one thousand killed in the past ten years alone. On June 17, 2015, Dylan Roof walked into the Emanuel African Methodist Episcopal Church in Charleston and killed nine of its members. Television and Internet news feeds flashed images that have become all too familiar. White boy with a gun. Blue glow of a crime scene. The soft light of a candle for the victims. Following the narrative arc the nation has grown accustomed to with these scenes, debates surrounding Americans and firearms flooded the media, reached their stalemate, and subsided as new headlines drew more clicks online. While Charleston mourned, photographs emerged picturing Roof with a Confederate flag, and the nation jumped to assign the guilt, for this one at least, to the South. 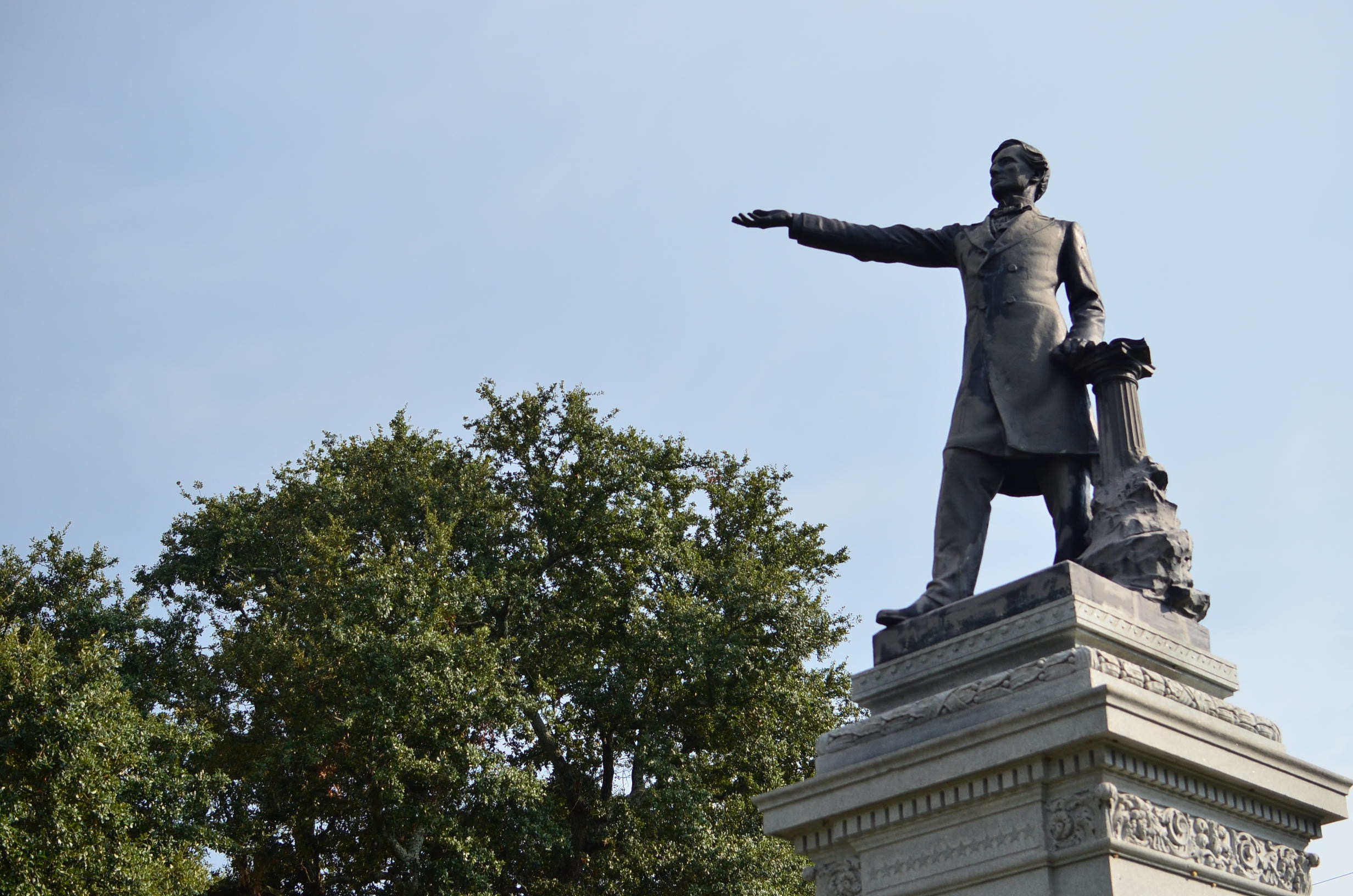 Reaction was swift. The conversation shifted easily away from guns as pundits pointed to Confederate symbols. Indignant politicians joined media outlets and corporate giants such as Walmart to demand the removal of the rag of Dixie from government buildings and junky merchandise. As state leaders in Columbia, South Carolina debated whether or not the flag would remain over the state Capitol building, Alabama Governor Robert Bentley surprised many by ordering three Confederate-era flags, including the battle-flag Roof sports in the photograph, to be removed from the Montgomery Capitol monument, which has memorialized the Confederate dead since Jefferson Davis laid the cornerstone in 1880. As the national media praised Governor Bentley and social media lit up in shock that Alabama took this step, other politicians scurried to catch the bandwagon rolling through the press. New Orleans officials, always eager to attract positive media coverage to boost the city’s tourist industry, welcomed a break from the daily headlines of shootings scattered across the city and looked to four monuments with connections to the Confederacy.

On a local level, frustrated natives worry that another influx of “carpetbaggers” has arrived, changing the demographics in many of New Orleans’s oldest neighborhoods and posing a threat to the New Orleans culture that has evolved from the city’s complex history. Furthermore, residents here watch the body count grow while city leaders appear apathetic. The White League militia has disappeared, but the foot of Canal Street is as likely to be sprayed with bullets as it ever was. As the city does little to address the widening inequality between the rich and the poor, which in New Orleans often translates to widening inequality between white and black, the consequences are counted with each day’s murder victims.

At the national level, the Black Lives Matter movement necessitated by violence against African-Americans provides ample evidence that institutionalized racism continues to destroy lives and proves white supremacy is not confined to the borders of the old Confederacy. Since Trayvon Martin was killed in 2012, the uneasy conversation about racism and its connection to violence in America has amplified. It’s making a lot of people uncomfortable, and it should. We need to remain uncomfortable. Removing these monuments produces a momentary feel-good response that allows the country to simply point to The South and sidestep uncomfortable conversations about race, poverty, and violence. 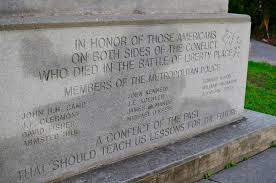 THE INSCRIPTION AT THE BASE OF THE BATTLE OF LIBERTY PLACE MONUMENT RECOGNIZES THOSE ON BOTH SIDES OF THE CONFLICT WHO DIED.

Whenever the rest of America insists the South is different, we agree. It’s easy enough to point to our diets, our accents, and the remnants of the Confederacy and Jim Crow that distinguish the South as separate. Our reluctance to remove these monuments demonstrates that many Southerners want to remember those differences. In New Orleans, we rely on difference to form our identity. We are unlike any other American city, but our unique culture has been born from a violent past marred with slavery and war, our roles as both colonizer and colonized. We memorialize our progress and our mistakes. These monuments record our history and their visibility keeps our memory fresh. As much as the nation insists we are different and wonders aloud what must be done to bring the South and New Orleans closer to the rest of the country, what happened in Charleston underscores not our differences but how we are similar to all Americans who also need to keep talking and recognize their own parts in the violence.

Shaye Hope teaches at Delgado Community College in New Orleans. She was born in Montgomery, Alabama and grew up in Alabama, South Carolina, and Mississippi before moving to New Orleans as an adult in 2002. In addition to teaching young New Orleanians about writing and literature, she spends her time as a pirate bartender in the French Quarter, teaching tourists about the home she loves.