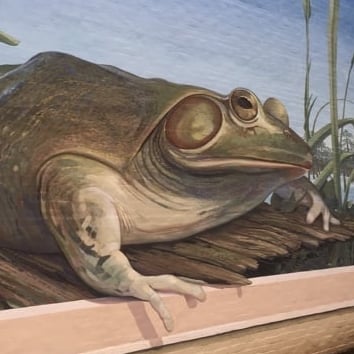 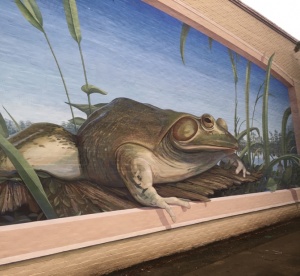 Rayne, Louisiana, Frog Capital of the World, is home to a variety of people, food, and as expected, frogs. The annual Frog Festival makes Rayne a tourist’s paradise. Thousands of visitors travel from many different states and even countries to join Rayne residents in eating fresh frog legs, a hometown delicacy. Because of the tourist traffic, Rayne works diligently to portray itself as a beautiful and “hoppy” community. Scattered about this prairie town are a number of precisely painted frog murals on the bricks of local businesses proving just how seriously Rayne takes its nickname. In an effort to beautify the streets of Rayne even further in 2010, each business was given a 3-foot-tall statue of a dull colored cement frog. The businesses were told to decorate their frog in accordance with the theme of their business. One of Rayne’s most humorous statues is Sonic’s, proudly residing near its entrance lane dressed in a blue and red Sonic uniform complete with yes… roller skates. Additionally, the Rayne Garden Club has consistently won both the District and State Cleanest City Contest in their population’s division, giving Rayne a literal spotless reputation. No matter how much Rayne boasts about its flashy awards and festivities though, it is not all its “croaked” up to be. No amount of frog kissing makes Rayne a “charming” place to live. 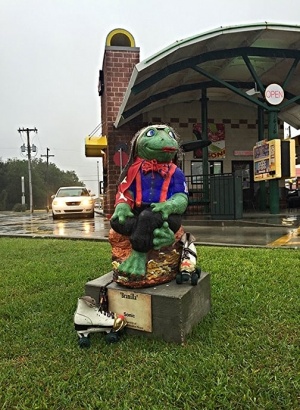 According to RoadSnacks, a self-proclaimed “infotainment” website that tells readers what their realtors won’t, Rayne ranks third of the ten worst places to live in Louisiana. This rating was the end result of some serious number crunching. After calculations of crime, education, weather, economy and entertainment, the Frog Capital of the World has been exposed. The area that knocks Rayne to its lowly rank is its sky-high crime rates. The overall crime rate in Rayne is 7% higher than the average in Louisiana and 42% higher than the national average. According to the statistics, Rayne commits much more property crime than violent crime, 10% higher than the Louisiana average and a whopping 44% higher than the national average. In fact, the chance of being a victim of property crime in Rayne, a town with a population of 8,027, is 1 in 26. Areavibes, a website that rates communities for livability, reveals the probable root of Rayne’s high crime, specifically petty property crime.

The Frog Capital of the World receives a D+ when it comes to employment rates. Rayne’s average income per capita is $18,733, roughly $6,000 less than Louisiana’s average. These rates are the reflection of Rayne’s educational system, which also receives a D+. According to Areavibes, only 64.7% of Rayne citizens complete the 8th grade, 58.5% complete high school, and 9.3% complete college (with a bachelor’s degree). The uneducated population in turn is an unemployed population living in poverty, which helps fuel the crime problem. It is a known fact that lack of education leads to crime, especially property crime, so if Rayne’s graduation rates were to increase, it is probable that crime rates would decrease. 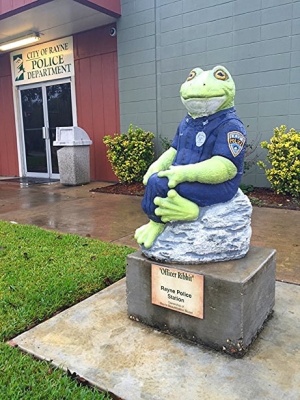 Organizations such as America’s Promise Alliance have recognized the country’s growing high school dropout rate. In 2010 the APA launched the “GradNation” campaign in an attempt to raise awareness and inspire action across the nation. Their goal is to reach a 90% on-time graduation rate with no individual school below 80% by the year 2020. The GradNation campaign thrives on statewide collaboration, sharing knowledge, and making successful models all states can replicate. Perhaps by becoming involved with this successful campaign, the city of Rayne might have murals and statues of successful locals instead of fast-food employees.

Rayne is a city that focuses its attention, time and money on seeking visitation. Signs of this truth are everywhere. On the “City of Rayne” homepage, browsers are greeted with, “Things are really hopping in Rayne. This town has it all. From friendly folks to mesmerizing murals, we’ve got plenty to rally around.” Another sign can be found past the Rayne Boulevard near the interstate ramps that reads “Friends Are Forever Do Come Back” a small farewell billboard speaking solely to its visitors. The city of Rayne puts on a pretty smile for outsiders while some of its locals suffer. Perhaps by spending more of its efforts on bettering the roots of high crime rates such as its education system’s success, Rayne will truly have news to “ribbit” about.

Whitney Fontenot has been resident of Rayne for 12 years, and she is currently a freshman majoring in English education at the University of Louisiana at Lafayette. She plans on becoming an impactful high school teacher who will help drive dropout rates to an all time low.