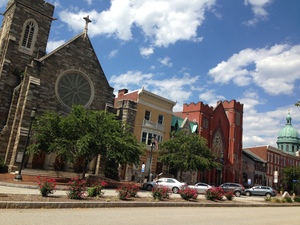 “I think I’ve seen you around,” the older woman tells me with sleepers in her eyes. “Maybe it was at the bar, but I’ve definitely seen you around.” I smile and nod. We are almost neighbors here in Harrisburg, PA; that should instill some sense of solidarity. At the Bernie Sanders campaign kickoff, there are surprisingly few locals. Hosted in a midtown woman’s apartment, the participants talk about the cities they call home: the girl with long orange hair goes to school in Chicago, the young man in a crisp oxford shirt works in Philadelphia.

When the skinny, backpack-laden youth asks if anyone had attended the recent string of town hall meetings, I feel a collective shift and gulp.

Well, I don’t really live here—I would have— I’ve seen that on Facebook — What was it about? — It’s good of Harrisburg to do things like that — I don’t vote here, the chorus of voices layer in dreamy synchronicity. The excuses aren’t unexpected. I hadn’t heard of the series of events either, so I quietly debate whether my inattentiveness or the lack of advertising for the events were at fault. After the speech, the crowd dissipates into insular groups.

No one really lives in Harrisburg. A city of lost toys, a mirage across the river that appears only between Friday night and Sunday morning, then lost in a mist of concrete dust from toppled buildings and road construction when Monday comes again. The commuters, the businesses, the federal agencies, they have no attachments here. They are merely existing in a place. Living in Harrisburg is relegated to the few who shoulder the brunt of the city taxes—the ones who can’t access groceries without a car, the burnouts and the families, the hipsters and the septuagenarian cat owners.

There have been discussions in person, online, and in the local papers about whether the influx of hipsters has been good for the city. Coffee shops have poured into street corners and previously unoccupied buildings, housing baristas with gauged ears and tattoos and who nod their heads to music that was digitally recorded before it was pressed onto vinyl—a sound they swear sounds better than the versions on their iDevices. Whether these privileged youths and the gentrification that comes with them creates or destroys culture is a contentious issue with vehement believers on both sides. The coffee is decadent and the businesses create interest in otherwise barren blocks, after all. The result is a multifaceted, disconnected city.

There are many versions of Harrisburg, and as such, there is no true Harrisburg. The art shows are wonderful if you know someone in the scene, but even getting from uptown to downtown is nearly impossible without a vehicle. This city, a highway divides. Without a singular vision of the city, it can never realize its true potential. In ten years, we could foster a culture akin to Portland; the bankrupt city could just as easily become the next Detroit.

“I go to the coffee shop a lot, that’s probably where you saw me,” I say. We’re both visibly uncomfortable, and I fail to find a viable line of discussion. The conversation falters, then fails. The woman looks to join her spouse, who is with a group of people she already knows. It’s easier. We haven’t connected, because the pastiche of insular groups called community doesn’t foster togetherness. Because no one lives in Harrisburg, not really.

Like a rock on the precipice of a cliff, Harrisburg has boundless energetic potential. A push would send us rolling, bouncing exponentially faster towards the horizon. A spirit of solidarity and a culture of community would give the city the push it needs. Despite the space-occupiers, the obstructionists with no attachment, the residents can find comfort in their shared identity, forced or not. Almost neighbors. Should the boundaries of Midtown and Uptown, of gentrified pretention and inflexible tradition start to blur, a culture that values both urban gardens and tight-knit community would bloom.

Like other urban centers, making connections becomes difficult as people are more cautious, as staying in seems more exciting than going out, and as renters are given no incentive to invest in their neighborhood. In my city, the potential is undercut by apathy and misunderstanding right now, but it doesn’t have to be that way. Each new bike lane, festival, and restaurant is an invitation to participate with and within the city. There were so few locals at the Sanders event because Harrisburg has an undeniable, raw appeal. Like a magnet, the power of the city can move. The more connections the residents make, the stronger they become, and the more the city can grow on the backs of the people who love it, not the businesses who use it.

Mary Imgrund is a recent graduate of Penn State where she studied English, American Studies, and Writing. She is a freelance writer, blogger, and sometimes-artist currently living and working in Harrisburg, PA. She works for IGI Global publishing and is the Editor-in-Chief of Magazine 1785. A horseback rider, fashion hoarder, and cat cuddler, her work has been published in the Sigma Tau Delta Rectangle, The Burg, and From the Fallout Shelter.