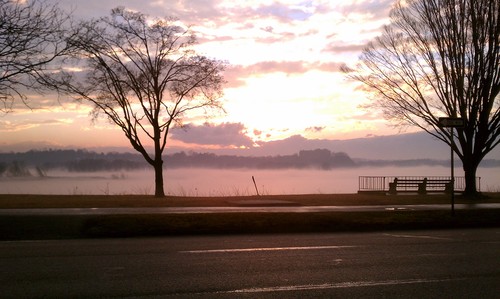 To the side of the dying, summer river, across the narrow band of Riverfront Park, over the three lane road that congeals at rush hours and becomes so empty at three a.m. that one can lie in its center lane for minutes with no far off sounds of cars to disturb, I heard a commotion to draw me toward the window.  My house, set between the broken bridge at Walnut Street downstream, its far section sunk into the river, and the dredged shallows nearly unnavigable to even small craft upstream, overlooked the street and the park and the banks onto the river.

The noisy people had gathered to stare at the city’s mascot, a thirty year old diesel paddle boat.  Seeing it wasn’t the draw, it made and makes three trips daily, spring to fall.  Seeing it stationary, seemingly mounted, as everything else moved around it, that was why enough people had gathered so as to be audible across the street and two stories up.

I stood at my second floor window watching the foundered paddle boat pull uselessly at the water, grasping at it without purchase.  There was nothing to be done, the Pride was stuck.

Three days she sat, set parallel with my home on the banks of the Susquehanna.  Despite her weight, her draft was shallower than that of most speeding day crafts.  The average three, three and half foot depth was normally more than enough for her, but this was a dry summer, and rocks, jutted up like submarine precipices in miniature, had shown up on the depth finder too quickly to be avoided.  Able though Captain Richard was, some accidents are unavoidable.  The Pride of the Susquehanna, a 55-ton tour boat, was many things, but none of them nimble. Ahead by three years, and I’m in a mirror of that last image, sitting in the bridge of the boat, looking East to my house as I pass by it.  The three treacherous rocks, named and blinking across my screen, I’m now in the same spot the Pride had foundered before, or nearly so.  The water is up, I’m six inches higher.

I’m anxiously driving the boat, a magnificent, authentically paddlewheel-powered thing, replete with not two, but three antique steering wheels, and in actuality guided by two tiny thumb sticks, themselves so warn as to feel as flimsy as a once loved Atari discovered in the basement.  My nerves are racked.  Captain Richard is talking to guests, ensuring they are entertained and well informed.  The worst that can happen, I tell myself, is that I run aground a thousand feet left of my house.  Shorter commute back, at least.

There are three towns along the Susquehanna, the largest Chesapeake Bay tributary, the largest river east of the Mississippi, that can boast having or having had a paddle boat within the century and a half since they were common place.  Of them, only Harrisburg has a proper one; the boat ten miles south, a paddlewheel in appearance only; the one to the north grounded since the late eighties, likely moldered to nothing or sold for scrap by now.  The Pride, true to her name, persists crisp white and bright red.

The boat is important.  It acts as a symbol.

Harrisburg isn’t known for much.  If anyone outside of Pennsylvania thinks of the city, it’s likely in relation to the Three Mile Island meltdown of 1979.  Anyone from elsewhere asked what the state capitol of PA is will likely reply Philadelphia, or maybe Pittsburgh.  To those in the state, there’s no real draw.  Harrisburg’s not so large as Pittsburgh, nor so entertaining as Philly.  There are fewer points of interest here than in either other city.  The social circuit is a recent invention, the art scene burgeoning, but only just.  Nightlife has gone from non-existent to patchy with potential.  What we have, what few other cities can boast, is the riverboat.  More than that, we have the river itself and the park system to which it belongs.

Harrisburg might be known externally for the near miss of one of the worst unnatural disasters in human history, but inside it’s overwhelmingly verdant.  Fiscally broken, the grass remains uncut.  The weeds, which in a sparser place might seem distracting, here weave throughout to make the city whole, to tie it together with a net of greenery, plant life existing even in the roads and in the shimmering summer parking lots. The river running the length of the western edge breeds groundhogs and skunks, sycamore and pokeweed.  Life seems to cascade from the shore, making the whole place seem livable, inviting, rather than some compromise made between location and commerce.

Other cities, the two mentioned above, have their own rivers.  But both of those cities are grey.  Philadelphia’s River Front Park is a pathetic thing ten feet wide, maybe a dozen long.  It’s parks are pleasant, but isolated, divided, animals in a zoo not at range.  Pittsburgh bestrides it’s rivers as if they were a nuisance.  Harrisburg embraces its western demarcation.  The Pride acts as symbol of that acceptance.  Tourists pushed into the few activities residents have to offer visitors will invariably take that ride.  When they do, they’ll see not the broken sidewalks, or the taxying cultural attempts.  They won’t see the city for what it isn’t yet, nor what it could be.  They’ll see the city for what it is, one alive in the natural sense, one verdant and true to its birthright.

Alexander Clark is a cross-genre writer of fiction and creative non-fiction living in Central Pennsylvania.  He is recently graduated of Penn State, having studied English, philosophy, and art.  When he isn’t writing he practices Pai Lum Kung Fu, herds cats, organically urban farms, and blacksmiths.