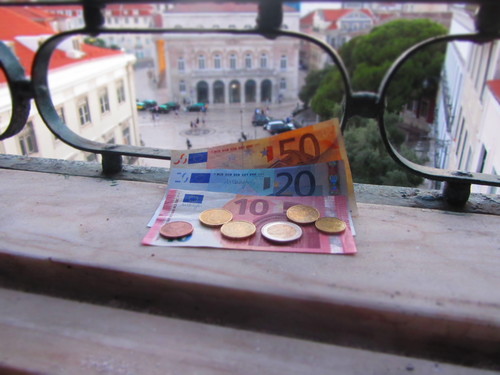 Before I flew to Lisbon, Portugal, I exchanged dollars for euros and held, for the first time, the crisp bright paper money – blue twenties, deep pink tens, green fives, each a different size, so that the blind could more easily distinguish them too. Now, with one week behind me and one week to go, I’m budgeting my remaining euros and watching the news about Greece. There’s a stark dichotomy here: While I’m traipsing around eating octopus salad and happily dropping tourist money on increasingly creative combinations of gelato (today’s was orange, rum, and butterscotch), the Greeks have had their banks closed for one week straight. A Greek shop owner on the TV said she was staying open, but she was asking everyone to pay in cash, with small bills or even coins, because she did not know when the banks would open again. She didn’t know what the next week would hold for her country, but she did know that fifty one-euro coins were going to be more useful to her than a fifty euro note.

Small bills. I brought with me a few fifty euro notes, and I underestimated just how hard it would be to break them. No one wants to dish out forty euros in change for a purchase of barely ten – even giving up two twenties seems an inconvenience to the average Lisboan merchant. If I buy a little cup of gelato for 2.80 and hand over a five, more often than not I get asked if I have three instead. The inconvenience of breaking a five! The orange fifty stays tucked in my wallet.

A few days ago, at the gelato stand, a dark-haired girl foisted a clear plastic cup in between me and my indecision about blueberry or lime. The cup held a few coins. But before I could fish from my pocket a coin for her, the shop owner, whose hairstyle hadn’t changed since her days starring as the schoolteacher’s mom from Pink Floyd’s “Brick in the Wall” video, released an invective of commands against the girl that amounted too, “get out of here, leave this lady alone.” The girl, to her credit, ignored the woman and switched her tactic. She pointed to the flavor she wanted (tiramouso), looked me straight in the eye, and asked for a small cup.

The new round of gesticulating rage from the shopkeeper made me dig fast in my wallet for my money, but not for money to share with the girl – I just wanted to pay so I could slink out of there and enjoy my perfect cool ball of blueberry gelato acquired at tourist prices. The beggar girl just stood there, like she probably does every hour. Then she raised on tip-toe and peered right in to my wallet. There was that fifty, and I knew she saw it. I had a crazy thought that I could just give it to her – I wasn’t going to be able to break it anyway.

But I didn’t. I zipped shut my wallet and dropped it into my bag, then zipped my bag shut, and hugged it to the front of me. The shopkeeper smiled. I sat at one of the bright yellow sidewalk tables with huge umbrellas for shade. I looked around the square for the beggar girl, but she was already gone.

To be an American in Europe right now, or maybe anytime, is to be hyper-aware of economic privilege. We have no corollary to what’s happening in Greece; it’s not like one of our states that is struggling financially is going to hold a vote to secede. I wonder, when I head home next week, what my euros will be worth in exchange.