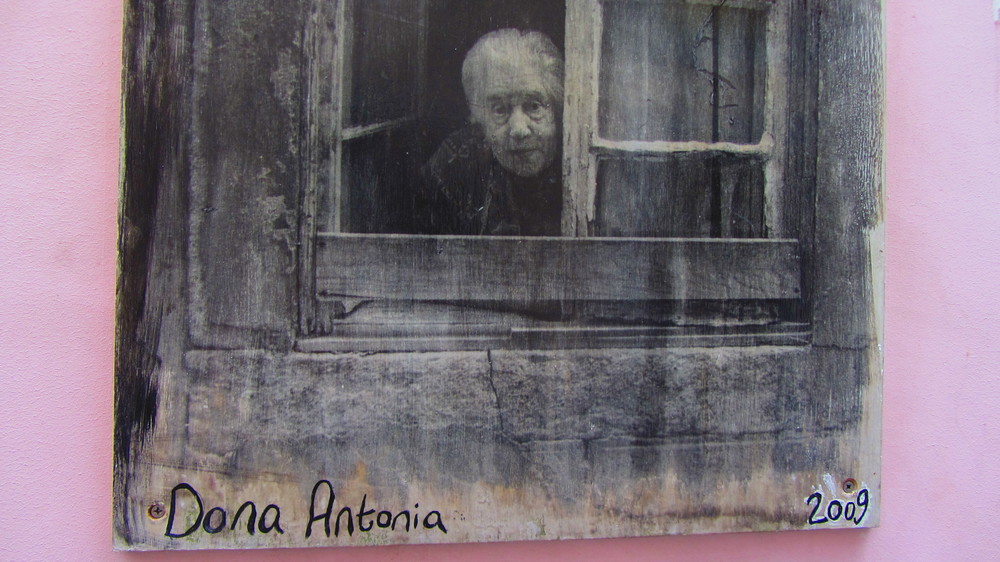 The year before I was born, 1974, Portugal saw the Carnation Revolution. The dictatorship masterminded by Antonio Salazar (dead since 1970) finally fell, and democracy rolled in after a no-shots-fired revolution that saw young people slipping carnations into the muzzles of opposing guns. Forty-one years later, I’m taking advantage of that democracy as I fantasize that I’m a “temporary local” during a two-week literary program.

But with democracy – and an influx of the young and the educated, the disposable incomes, the leisure – comes another problem. I see it laid out, oddly enough, on a huge sign in the ramshackle old town spilling down from Castle Sao Jorge. The sign explains all the construction planned, and it lays out a rationale. The obvious (maintaining roads, beautifying parks). The unusual: improving relations between the young and the old. Seriously. Tax dollars are being used to improve the relationships between the old and the young in Lisbon, Portugal.

Pensioners who seem to be an entirely different species hobble through Lisbon. I hate that I say it that way, but I think that’s what it’s like. They are elderly, and small, with canes and big hats and old hair. They sit in doorways and gasp in the searing midday heat, like carp. They seem to gawk at the cosmopolitan carnival of bad judgement around them (the McDonalds, the selfie sticks, the noisy tuk-tuk tour cars, and why are the young people staring at screens in their hands?). They were all alive, and young, during Salazar’s regime. They’ve seen some things. Other things.

Now, I wonder if no one sees them. I don’t see them at first. I have to consciously look at the elderly, admire their practical shoes that have taken them the long way down to the little market, their reused plastic bags in hand for figs and apricots and sausage. On my first day in Lisbon, I glanced down a touristy lane and saw a grey-haired woman, hunched on a folding chair, playing a melodica for tips. She had no eyes. I was horrified and looked anywhere but at her.

What does it mean to see, really, in our ocular culture? On my second day, I wandered up to the castle on the hill, but got sidetracked in the old Castle Town neighborhood of narrow, winding streets. On the street just off Largo Dos Trigueiros, I walked right in to the artist Camilla Watson’s important – and permanent – display of public portraits of the elderly.

The exhibit is brilliantly simple. Watson took black and white portraits of the elderly patrons of her neighborhood, enlarged them, and hung them on the houses, next to windows and doors, so that the portraits become another type of window. They are static, but full of life, of course, and that’s the point. Were I to just walk through the neighborhood, I’d lower my eyes if an actual older person approached. I’d step aside to make sure they could pass safely. I might smile and nod and not really mean it. But with the portraits, I came to a full stop and faced them. I could look in to these eyes through a photographer’s eyes. These resident were always home, always watching me watch them. I loved it. When I reached the end of the street, the end of the exhibit, I immediately turned around and retraced my steps, to look at each portrait a second time, a third. I even went back the next day for one more look.

I am fascinated that Lisbon – a city with a socialist mayor – sees relationships as part of a public works improvement plan, and that it’s a particular type of relationship, between the very old and the very young, that seems to be both disappearing and necessary. The artist, Watson, also has a project where she teaches young people in Lisbon how to make pinhole cameras. Document, she is saying. Think of the frame and the focus. Think about who we are including, and who we are leaving out. Do it with any and all means possible. And do it soon.