Terry Eagleton identified at least six general functions of ideology: unification, actualization, rationalization, legitimization, universalization, and naturalization. In the first The Hunger Games film we encounter various manifestations of these functions. One key carrier of legitimization of the annual Hunger Games themselves is the cluster of myth/history/tradition. As Caesar Flickerman and Game Master Seneca Crane discuss the “meaning” of the Hunger Games in the opening scene, we see how the transformative power of ideological memory can create what was once a punishment into a tradition and then a kind of healing process that “knits us all together.” 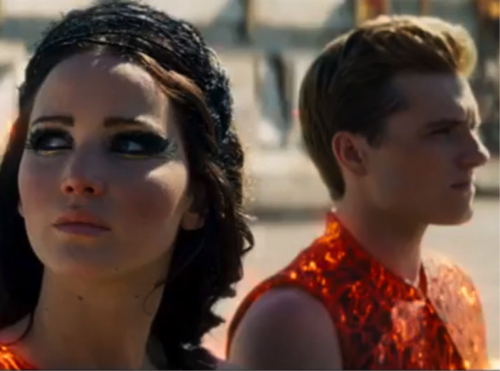 This begs the question of our contemporary world where, perhaps, Ideological State Apparatuses have been homogenized into a conglomerate Ideological State Media Apparatus. It could be that by studying the manifestation of subjectivity in The Hunger Games we can analyze whether the public realm and the private have been coalesced into mass spectacle where individual fantasy and collective tradition become one and the same. What kind of mechanism of subjectivity (individual or collective) is embodied in Katniss Everdeen and Peeta Mellark? In this mise en abyme “game” does Haymitch Abernathy’s historical memory give him an advantage? And is not Effie Trinket perhaps the wisest of them all?